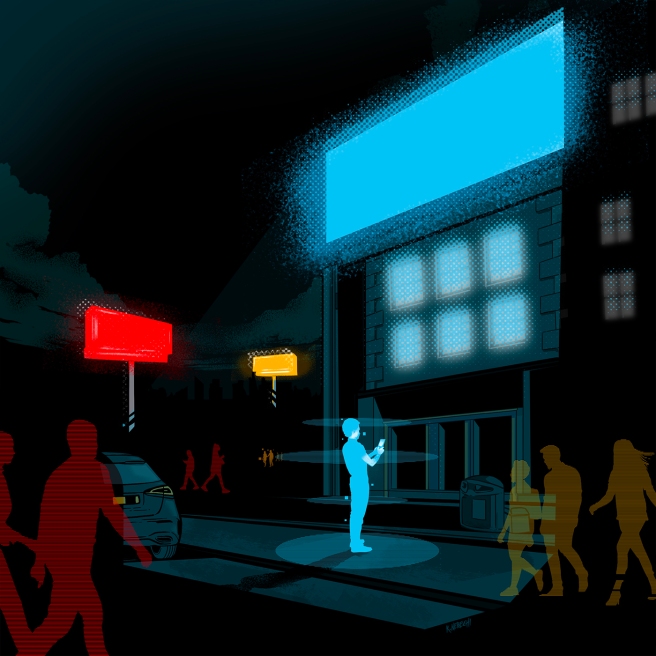 August 2019 – “Come on bro, just pick some trousers. We’ve been shopping for time and I’m starving.” It was a sweltering summer’s afternoon in London and I was out with my mate Andy who was looking for some new work attire. However, in the seven years I’d known the guy, he’d never so much as picked up a pair of socks without turning it into a bargain hunt. “Fam, should I suck (steal) this handkerchief?” The guy had picked up a fine, royal blue pocket square patterned with white polka dots, he ran it through his fingers, looking up at me. I paused before responding in an exasperated tone. “Fam, you’re a big man to be stealing pocket squares… We’re not at uni anymore.” I thought I’d shamed him out of it as he placed it back on the rack before I heard him mumble, “Mans coming back for that you know…”

We continued to roam around the men’s section before an attentive assistant came over, probably noticing what looked like two clueless youths. “Can I help you gents with anything?” Andy launched into his usual ramble about how his weird proportions and tight budget meant that he wasn’t much impressed by what was on offer. I wandered around idly as the familiar and inevitable remarks of “I’m afraid those are the only sizes we have,” and, “TM Lewin do these thirty quid cheaper though,” floated over to me. I wandered back around to the pair as they were mid-debate. Andy was holding a pair of trousers, seemingly not happy about the length. “Don’t you have any shorter than these?” he complained. “I’ll check again in the back but I’m sure that we don’t sir.” Before Andy could respond, I interjected. “Why don’t you just buy these and get them hemmed?” There was a pause before a confused Andy replied, “Get them what? What’s that fam?” “Hemmed bro,” I said. “Take them to the tailor or dry cleaners and get them cut.” Andy looked at me with a combination of confusion and annoyance. “Fam, what’s all this hem talk… You’re fully middle class now. I ain’t got pees (money) for that shit.” I laughed before suddenly getting defensive, “Fam, who’s middle class. It’s only an extra thirty or so quid and you haven’t found what you’re looking for anyway.” He replied, “Yeah, I ain’t got an extra thirty quid still… lets bounce.” Andy gave up on his quest and we left the sales assistant bewildered.

As we made our way out of the store, Andy’s comment about me being middle class played on my mind. I turned to him and asked, “Fam, do you actually think I’m middle class?” We had come by the pocket squares again as he nodded back to me, “Yeah, definitely man.” He reached back for the pocket square from earlier and deftly slipped it into his jacket. “Man said hem you know, you’ve fully left the hood my bro.”

Today – I spent a lot of time wondering how I felt about Andy’s statement about me being middle class. It caught me off guard because honestly, I hadn’t thought much of my social class for years. It was always apparent to me that I was a working-class guy that came from a working-class background. However, as I started to talk to more people about the subject it became clear that somewhere in the last few years, I had indeed begun to transition away from my working-class roots, and into spheres I was previously unfamiliar with. The lines for what denote class are extremely blurry though: income, race, background, education, current hobbies and social circles all contribute to your social class and a sudden change in one, if possible, does not guarantee social mobility. After having a think about it I decided my thoughts were as follows.

First, I’ve accepted that I’m no longer a poor, working-class lad off the block. I’m not down to my last pack of Indomie, living off Tesco’s meals deals or filling up my car tank with £3 worth of petrol. I, by most standards, live a fairly comfortable life. I’m a London home owner with a good salary, healthy savings and an investment portfolio to boot (for inspirational purposes only). It would be disrespectful to those genuinely struggling to claim I’m still struggling. Plus, it would completely discredit the effort I’ve put in to change my circumstances in life. After all, I’m proud to say I’ve done okay in life so far. Having said this, for there to be a more permanent shift in social standing, the wealth I create in my lifetime would have to continue down through any kids that I have. In many cases, the wealth that is attained in one generation can often be mismanaged by the next. The creation of a legacy that is fiscally comfortable as well as financially literate is paramount in furthering consequent social mobility.

Secondly, aside from doing well financially, “climbing the social ladder” often means furthering and developing your taste of what you do in your spare time in addition to the company you keep. The two are inherently linked, as you typically keep company with people who share similar interests to you, but it’s interesting to see how that does or doesn’t change as your income increases. If you grew up working-class like I did, there normally comes a juncture where as your income increases and you subsequently meet new people, you have to decide whether you actually enjoy or want to take part in some of the new shit you’re being introduced to. For example, I’ve had several people who I work with suggest we take part in activities I’ve never experienced before, like the opera, skiing, playing golf and doing cocaine. Now it’s not that I’m against trying new things, but most of the time I can tell you when something is not for me. This is the aspect of social mobility I struggle with the most because the truth is, I couldn’t be less concerned with it. For me personally, barring a few special cases at uni, I’ve managed to keep pretty much the same set of friends since I was a kid and although we’ve all done well for ourselves, we still mostly spend our time eating a disproportionate amount of fried chicken and playing FIFA. I don’t particularly have the urge to play golf or croquet with colleagues from work, nor do I want to spend excessive amounts of money skiing or at the opera. Yes, it dents my chances at easier social mobility and yes it probably hurts my chances with things like promotions but I’d be lying if I said I felt otherwise. The important part for me however, is at least identifying why I feel this way.

This brings me on to my third point and the core of this whole discussion. I (and many others like myself) still grapple with the idea that I have moved on from being working-class. Growing up in a council estate in South London, you often become rooted in your status as the underdog and find both a salvation and great power in it. Let’s face it, if you’re already stuck in a shit hole it can’t get much worse, right? There’s no greater motivation than having nothing to lose. Any progression becomes your own enemy as you climb a steeper hill with a bigger fall back into the trenches you just clawed your way out of. This fear of acknowledging any progression along with a highly misplaced sense of bogus loyalty to the ‘endz’ means that whilst those who grew up in a council estate may physically be able to leave its boundaries, many may find it hard to mentally accept they’ve outgrown it. Being labelled a sell out or as Andy put it, “leaving the endz”, often comes with negative connotations and can be a sensitive topic for young men from the ‘hood’. I’ve often had cases where people I grew up with have claimed, “ah, you changed”, “we don’t see you anymore”, “ah, you’re acting white”. It can make you question who you are and who you’re becoming. I’ve found myself being able to shrug these comments off easier as the progress in my life starts to become more visible and serves to inspire more than intimidate. It’s easier to laugh off a man saying you’ve changed when you’ve just booked your mum her third holiday of the year.

All in all, I’ve learned to accept becoming middle class. Despite most of it being new territory, I’ve learned to embrace it as part of my journey. Social mobility has taught me a lot of things and introduced me to people that have changed my life for the better. Just don’t expect me to being doing cocaine in a toilet in the Opera any time soon…