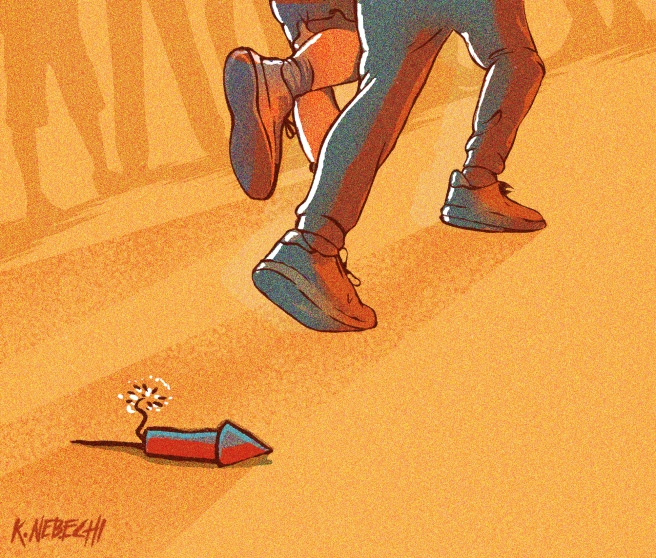 December 2005– “Could you all quieten down please!” But it was no use, as another projectile whistled past his head, he realised his class had broken out into full anarchy. A cocktail of restlessness, end of term excitement and unfiltered Year 9 testosterone had tipped them into chaos. The meek substitute music teacher was no match for it. It had only been a week since his predecessor had left, not able to make it through the first term after realising she’d rather be jobless than trying to prevent a weekly Royal Rumble.

The class was carnage, keyboards ringing off rock samples, students playing penny games in the corner, boys instinctively ducking as objects came whizzing overhead. The main event however, had just broken out as two boys began wrestling near the middle of the room. There was a mad rush of student and teacher to the scene, with the latter getting nowhere near. A scrum of twenty boys had gotten to the action before him. I stood on a table to get a better view, hurling whatever I could get my hands on into the centre of the student colosseum, rattling the animals further. “Ay bang him! Don’t have it!” chants from the crowd as the boys tussled to get the upper hand, swinging one way then the next, blazers ripping at the seams. Realising the futility of his efforts, the teacher finally gave up trying to reach the lions pit and rushed out the door for reinforcements. As I watched him sprint out, the fight had taken a turn, blazers had now been ripped off and blows were being swung wildly, with both boys wanting to land the prize hit. The bigger of the pair launched an almighty haymaker, it’s ferocity matched only by its spectacular failure as he swung and stumbled over his own feet. His opponent capitalized. Taking a step back, he landed with a crack to the jaw, rocking the larger boy and prompting a huge roar from the spectators. “This is what school is all about!” I thought, punching my hands wildly in the air celebrating the underdogs victory, his opponent now out for the count.

Just then, fists still raised in jubilation, I noticed a boy on the outskirts of the group, a sneer curled on his face, sparks flying from his hands. Time slowed down as we locked eyes, the smile slowly fading from my face as I realised what was about to happen. “FIREWORK!” I bellowed. The class wheeled round in unison toward the door. We maybe had a few seconds before the fizzing stick of lightning would be lobbed into the crowd, where it would crack to next was anyone’s guess. Boys were scrambling over the strew of bags, music equipment and their own laces to escape the room. I jumped off the table and was promptly bundled over, my face slamming hard into the floor. Nose throbbing, I quickly got to my knees and glanced to my right. A second too long. BANG!

Today– Whilst I’m sure you’re eager to find out if this episode left me horribly disfigured and explains why I’m talking to you through a cartoon, soz but not soz. I luckily managed to scrape through the debacle with nothing more than a bloody nose and a migraine. Jokes aside though, if you went to a public school (or any half decent school for that matter) then a live re-enactment of Anthony Joshua vs Dillian Whyte followed by The Gunpowder Plot in a Year 9 Music class seems pretty outrageous. Unfortunately, it wasn’t a standalone incident and scenes like these were pretty standard where I went to school. Mind you this was only the tip of the iceberg.

Now, whilst I’m sure you feel an incredible amount of sympathy for poor me, do you know who the real victim is here? The teacher. Yes, poor Mr. Garcia and his fruitless attempts to teach my sorry bunch the dulcet tones of C Major. His struggles were symptomatic of those faced by several other teachers of mine and many teachers today. Run ragged, teachers face a relentless battle of growing classes, thinner funding and a student population with an ever varied set of problems. The Department of Education’s School Workforce in England census released in June 2018 outlined that the trend for the teacher-student ratio in the country has been on the increase since 2011, rising from 14.9 to 16 for state funded secondary schools. Also, despite a bump in the average wage of classroom teachers of £300 from 2016 to 2017 the average increase in annual income from 2010 is less than 1%, meaning the gap to their peers in other developed nations is widening. Teachers have less time, effort, resource and frankly incentive to make each individual students time in school a success. This unfortunately comes with dire consequences. People often wonder what the root causes of today’s knife crime are. I’ll save the broader conversation for another post, but it’s been shown there’s a direct link between rate’s of expulsion and later rates of imprisonment for young people in the UK.

The important question is where does the fix come from. Most people would agree every young person should be able to pursue their dreams and aspirations with an unbound framework of support. However, if the school system is giving less, who makes up the difference? Some kids like myself are relatively lucky. Good parenting and friends who looked out for me, both meant that I managed to scrape through school with only a few near misses and good grades to boot. However, for those not as fortunate, their journey was a lot bleaker. Convicted felons, first generation immigrants, students from broken homes and volatile families. I knew peers at 15 who’d been through more in life than some grown adults. Boys and girls who were trying to convince themselves that they were more than just hood rats. Where does the responsibility of school start and stop for boys and girls living in a world of instability? Youth clubs? After school schemes? These are crucial bases that must remain open and well-funded lest we continue a downward spiral of marginalisation of some young people.

Many of the kids I went to school with have grown up and gone on to do great things. They’ve become business owners, media creatives, music artists and footballers alike. The evidence suggests supporting young people who live in and come from tough environments have huge benefits in cultivating unique and exciting talent, it’s important that we find a way to do it systematically or risk the sparkle of the next generation fizzle out.